Now it is necessary that we examine closely the reasons that might push Merah Mohammed, 24, Toulouse and the Muslim terrorist to perpetrate the massacre in the name of Islam! In this area, no question of truce. It is a civic duty not to evade this debate.

Stop this farce of making a distinction between anti-Zionism and antisemitism. As donkeys uncultivated useful idiots such Stéphane Hessel "the indignant" and other cultural abrutiles Marxist and communist collectivists do so is already an insult to the intelligence but that it be taken over by the media saying'm supposed to but the boot of 'Islamic Marxism and it is intolerable to the case before us today, a true criminal enterprise.
That BDS and other euro palestine, palestine solidarity, and all sites left communist, PCF, NPA, PIR, The Greens in Europe Ecology stinking full nose-Semitism are expelled from France. 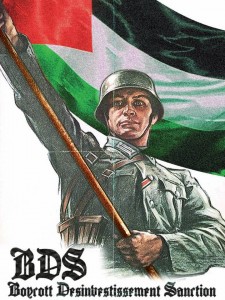 Merah Mohammed the Muslim anti-Semite says he is against the law on the veil he said the fight against French participation alongside NATO in Afghanistan he said he acted to avenge the Palestinians he also says that it is only the beginning of a major terrorist campaign which is very worrying.

Those who have fanned these embers were armed assassin and his arm are a huge share of responsibility in this tragedy. The best way to honor the victims of this horror is to watch history in the face, not to start to anesthetize our memory.

The fault is with globalization, ideas foul of UMPS, this rotten Republican Left and anti-Semitic, this multi-ethnic society, multi 'cultural', multi racial, the horde of these "aliens" infiltrating our social body, polluting our "national identity". See here, Islam is not a religion! It is a plague!

Sine in Charlie Hebdo of 11 June 2008 summarized the situation:

"I've never been conspicuous by my tolerance but it's not getting better and, at the risk of sounding politically incorrect, I confess that, increasingly, Muslims and I can not stand that, I meet more women veiled that thrive in my neighborhood, the more I want to violently kick their ass!

I always hated frogs clam Catholics dressed in black, I do not see why I should endure these potatoes in the best shape and distressing real scarecrows against the seduction! Their bearded husbands embabouchés and harem pants under their tunics Koran have nothing to envy them unsightly views. They compete with the Jews of Lubavitchers ridiculous! I also heartily renverserais, the plate of lentils with sausage on the face of kids who refuse to eat pork cantoche.

When we as parents that their narrow-minded, the only remedy and to disobey them and send them to worship! And when they say it is for hygienic reasons they refuse pork, citing illness dating from the time of their prophet but eradicated long ago, my blood does a beat and is immediately transformed into a sausage !

Stupidity has no limits, it is known, but let the respect and, more importantly, to maintain it on behalf of an indulgence of which they are, themselves, no proof! "

The murderer, a criminal Merah Mohammed Muslim, in the tradition of Zacharias Moussaoui a "French" paper of Algerian origin who performed "stays" or courses of terrorism and assassination in Afghanistan and Pakistan, said be a "mujahideen" as he is a vulgar and fellouze belonging to "Al Qaeda", he claimed that sinister vermin have wanted to "avenge" the Palestinian children and to attack the French army combat in Afghanistan. He perfectly registered the subliminal message of some anti-Semitic leftist political will of the UMP party socialist far left to bring it to its extreme: the physical elimination of apostates and Jews. Not showing him any "indulgence"!

Theses nauseating anti Semites are now propagated by activists of LDH (League of Human Rights), see here. As Sakina Arnaud born miss Khimoun which had already been sentenced in 2005 to a fine of 300 euros by the court Appeals of Bordeaux for acts of "boycott" Jewish products. The court, however, had reclassified the facts "slight deterioration". On 10 February 2010, the Criminal Court sentenced her to Bordeaux € 1,000 fine, the active and militant member of LDH who received the unconditional support of the MRAP and all nidoreuses Marxist associations had been recognized guilty of "provoking discrimination and racial hatred 'conviction upheld on appeal.
Furthermore incitement to racial hatred Semitic, miss Arnaud activist LDH had increased the insulting and false proclamations against Israel.


Alima Boumedienne Thierry d'Europe Ecologie les Verts soutient des terroristes Islamiques!
Since 2000, the Jews of France were exposed to the most important manifestation of anti-Semitism since the Holocaust.
The vast majority of these hate crimes were perpetrated by Arab immigrants exploited by the so-called "progressive forces" of "humanist tolerant" and "racist" as the activists of the PCF, with the Greens, LDH, LICRA, the NPA The PIR and MRAP or in their manifestations of one shouts "Death to Jews" with Arab Muslims who were protesting against what they saw as "assaults" directed against Israeli Palestinians. "
Haaretz reports: "Many thought that after the Holocaust and National Socialist occupation, French children would never be killed in cold blood because of their religion. Yet this is precisely what happened in Toulouse. " (...) 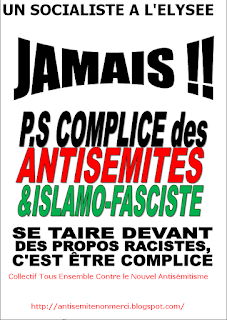 Among those who fanned the embers and have armed the killer of the Muslim Mohamed, "French" paper of Algerian origin there is the Socialist Party and Mr. Holland is a significant part

Racism and antisemitism of the Socialist Party as now spreads to one of the newspapers yesterday and Laval, the Socialist mayor of Aubervilliers was early July 1942, offered to deliver foreign Jews living in the unoccupied zone in attaching their children!! Yes, Logan What's! The deportation of Jewish children! Following appalling HERE. . 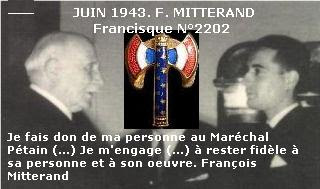 And July 6, 2006 following revelations of statements made to a delegation of the French Socialist Party Francois Hollande and directed by Pierre Moscovici we are entitled to ask questions. Then first secretary of the PS, François Hollande was received Amar Saadani then president of the National People's Assembly Algerian NPC.

According to a senior RCD to which the French Socialists have reported the remarks subsequently confirmed by a former head of the FFS, during the interview with M Moscovici national secretary for international relations, Kader Arif and Bariza Khiari: the third strong man of Algeria faithful to its primary Semitism dropped straight face "at PS there are too many Jews must begin de-enjuiver to counter their lobby."

The announcement was ignored by the "journalists" and the SNJ was without major effect on the part of the PS, and playing the nidoreux usual "play" filthy socialist politician strengths and power, did not seek to offend his interlocutors racist and antisemitic Algerians under "possible" future partnerships if the PS had to take political power in France and for an "international socialist" solidarity. Click here for-ps-and-the-Jews.

At a time when racist and antisemitic actions are multiplied throughout France, where French and Jewish populations of strain are subject to a flood of hate, we would have liked the President of Licra, Alain Jacubowicz, the President of the Union of Jewish Students of France (UEJF), Johnatan Hayoun, or the inevitable Sopo have the decency, and immediately the Islamic terrorist attacks of Toulouse did not yelp "the liberation of racist speech" so ignoble and crudely manipulative when families are in pain. Because that famous "Islam" is not only a religion but a totalitarian political-religious project antisemitic what it has to know.

Besides the similarities between the communist parties and the Islamists are obvious: hatred of the other, tyranny, autocracy, dictatorship, eliminating opponents, crimes and genocides as ordinary management systems of oppression, attacks, rapes, homicides, crimes, torture, prohibition of all kinds, dubbing forced the ruling party, forced communions (prayer for some, the international discourse on the Castro Communist hatred), etc. ... etc ...

The Muslim Mohammed Merah was on a mission on behalf of Islam.

Verses in the Koran calling Muslims to jihad, war coraniquement "halal" (legal) against the "infidels and apostates" The disbelievers are those who are not Muslims and apostates are, for example military waging war against the Islam!

S. 5, V 33.
Nothing else: the payment of those who wage war against God and his messenger and strive to disorder on the earth, is that they be killed or crucified, or they are expelled from the land : that for them the ignominy below, and beyond there is a great punishment for them.
Le guerre sainte dans le Coran voir Ici.
The order to participate in Jihad is repeated in the Qur'an and Sunnah (words and deeds of the prophet Mohammed a pedophile and murderer). Jihad for a good Muslim is the best religious act that man can perform as indicated in the Qur'an and Sunnah. The "prophet", he said: "The head of the matter is Islam, its central pillar is prayer and the top is Jihad."

The Muslim Mohammed Merah responded in its own way, the climate talks dirty communist by arsonists. How, then, does not face this reality and point to the sorcerer's apprentice Marxist, Trotskyist arsonists NPA, which today before international opinion, are firefighters, protecting the fundamental values ​​of our Republic, then , a few days earlier, they blithely flouted ?


For the Secretariat of CTECNA. unreadable

Copyright 2012. AIS News Agency (International Accreditation System). CTECNA Technical Secretariat (Trade Mark) All rights reserved.
This material may be published, broadcast or redistributed to the extent of citing the source.
A spelling mistake, an error to report? A point of clarification? Sub to send us? Write to ctecna@gmail.com
Controlled information free of antisemitism.
Go visit the blog of our friend Alain Michel Labet Bornay of the comments are free!
Publié par Maurice à 10:31 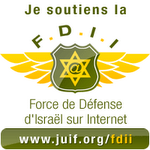